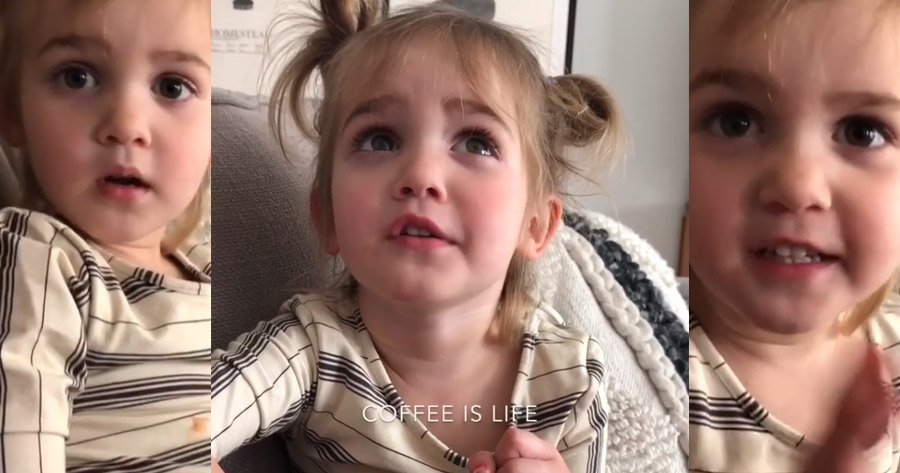 Mila Stauffer is an adorably precocious toddler who has risen to Instagram stardom. Her fan page was originally started by her mother, who never thought it would get so many followers.

It’s amazing to watch Mila, along with her shyer twin sister Emma, grow up via Instagram. Now, this pair of 3-year-olds entertain more than 3.7 millions fans across the world. Recently, a video was posted from Mila about coffee.

We love how Mila always comes across as sassy and quirky in her videos. This time, she explains how coffee is amazing, better than any adult could. Here are some of her best coffee quotes:

“Okay, just call me the engine that said ‘but coffee first.’”

“A yawn is a silent scream for coffee.”

How much more adorable can a preschool kid get!

With their rise to stardom, Katie, Mila’s mother, also handles the ad content for their Instagram. From KidsFresh to getting a toothbrush on Halloween. This has allowed her to quit normal job to getting paid by sponsors who use her page. Mila’s twin, Emma seems quite camera shy. But when Mila get’s in front of the camera she is precocious and opinionated. She covers a wide variety of topics from Santa (“this guy has no life”) to coffee (“coffee is life”).

Here’s the video. For more about Mila and her family, scroll down.

Fans Around the World

Today was so awesome and we were truly amazed by the turnout. Everyone was soooo sweet and so nice…the girls had such a fun day!! It was soo great to meet and talk to all of you!! And I can’t thank @ladureeus enough. They made this such a beautiful event. They thought of everything. I literally can’t stop smiling. Thank you again to everyone

Mila’s online-fame has happened to have real-life implications. Her fans approach her on the street when they have outings. Sometimes, Mila will even go up to people before they can ask and say things like “do you want to take a picture with me?” In November, the twins had a meet and greet with their many adoring fans at a small cafe in Beverly Hills. Katie made sure to have security present at the event. According to a comment she made in an interview with BuzzFeed;

“It was super awesome. I mean, I guess we could have had some mass murderer come, I don’t know, but we got lucky.”

Katie describes that people will stop them on the street for photos or to make comments. One man from France even bent down to give little Mila a kiss on the cheek without permission. It is a custom greeting in France to kiss on both cheeks. Here it is seen as inappropriate, but Katie took it in stride.

What’s Next for the Girls?

Even though some Instagram users are saying that Katie is ruining it for them, or that the parents are taking advantage of their children, Katie remarks that all the money they make go into a trust for the girls. Katie and her husband Charlie deny they are “making money off their children.” How is what they are doing on Instagram any different than what child actors do? Katie also says that she doesn’t force her children to do this, they want to make the videos. Since Mila is a toddler, there are times she refuses to do them. Katie respects that. So what’s next for the girls? The twins will be starting preschool this year. Also, if you’re in the New York area a publicist sent an invitation to BuzzFeed remarking;