How ‘Alien Mummy’ May Shed Light on Genetic Disorders 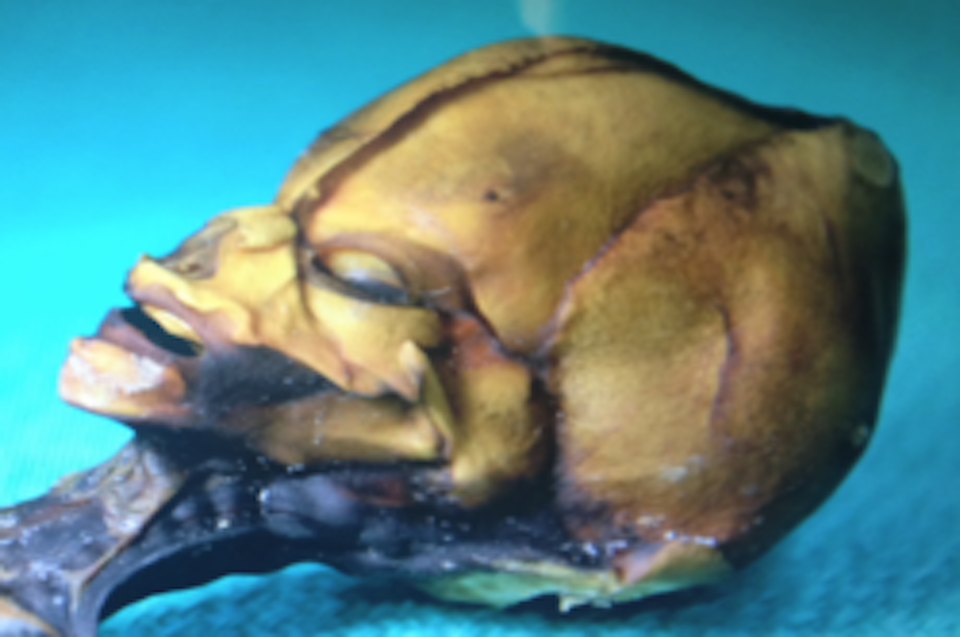 Scientists at the Stanford University School of Medicine in California are researching a perfectly formed skeleton. In and of itself, there’s nothing unusual about one of the most notable medical research schools in the nation studying a skeleton. This one, though, is just six inches long. It was deemed so weird that many speculated that it was alien. It’s not.

The skeleton, nicknamed Ata, is human. Scientists even know that she’s female and they initially thought she was 6 to 8 when she died. Ata’s remains were discovered about 15 years ago in an abandoned town in the Atacama Desert in Chile.

What is the Alien Mummy, Really?

An amateur collector in Chili ran across Ata inside a white cloth in a leather pouch. Aside from the unusual size, it was almost perfect. Ata had a full set of hardened teeth. She had 10 ribs instead of 12, like most humans. She also had huge eye sockets and a long skull that ended in a point.

At first, Ata’s remains made their way to a private collection. Ata’s discovery was so intriguing to UFO researchers, that she has been featured in documentaries and in alien TV shows. Gary Nolan, a professor of microbiology and immunology at Stanford and the senior author of the study that was released on March 22nd, said:

“I learned about this through a friend who was interested in the entire area of extraterrestrial life,” Nolan wrote in an email. “He told me about a documentary coming out (‘Sirius’ … you can find it on Netflix now) which was to feature the ‘Atacama Humanoid.’

It was claimed that this was possibly the mummy of an alien.

“That was a significant claim in and of itself. More shocking though was the picture I was provided that was part of the online publicity. I decided to contact the movie directors (basically on a dare …) to tell them it was possible to do a sequencing of the specimen (if it had earthly DNA …) to determine its origin.”

Nolan asked the producers if could look for DNA. While the skeleton is still owned by the collector, the owner agreed to let Nolan take X-rays and bone marrow samples from the ribs and right humerus.

Surprisingly, Ata’s remains are only about 40 years old. Scientists were able to extract DNA, which was entirely terrestrial, and entirely human. Ata was not 6 to 8 when she died, though. She was just a fetus, but she had a rare bone-aging disorder that made her seem much older.

Where Did the Alien Mummy Live?

Technically, Ata didn’t live, but if she had been born alive, she would have lived near the place they found her remains. She shared DNA with indigenous Chilean people and non-native caucasian people.

Why Does the Alien Mummy Look the Way She Does?

Ata had several bone deformities, including skeletal dysplasia (dwarfism) and facial malformations among others. Some of the mutations were especially fascinating to scientists because they’ve never connected the mutations to bone or physical disorders before now.

How Did the Alien Mummy Die?

Scientists don’t know exactly how Ata died, but it’s pretty clear that even she had made it outside the womb, she wouldn’t have lived long. Her bone structure simply wouldn’t have supported her organs.

What Does the Alien Mummy Tell Us About Modern Humans

Nolan and his team have a lot of hope for Ata’s discovery. Genetic science is still relatively new. Far too often, scientists see a single mutated gene, or search for a single gene, and assume that’s the cause of disease. As Ata’s skeleton has shown, though, many genetic disorders can come from a series of mutated genes.

“For me, what really came of this study was the idea that we shouldn’t stop investigating when we find one gene that might explain a symptom. It could be multiple things going wrong, and it’s worth getting a full explanation, especially as we head closer and closer to gene therapy,” (Dr. Atul) Butte, (another senior author of the study) said. “We could presumably one day fix some of these disorders, and we’re going to want to make sure that if there’s one mutation, we know that — but if there’s more than one, we know that too.”

There are sick children who may benefit soon from the discovery of Ata. Doctors and geneticists should cast broader nets in the search for genetic abnormalities.

“What this case taught me we that sometimes there might actually be more than one major DNA difference involved in explaining a particularly hard-to-explain patient. We shouldn’t stop a search when we’ve found the first relevant mutation; indeed there might be many others also involved.”

Featured image via Wikipedia Fair Use. For more information, you can read the study here.