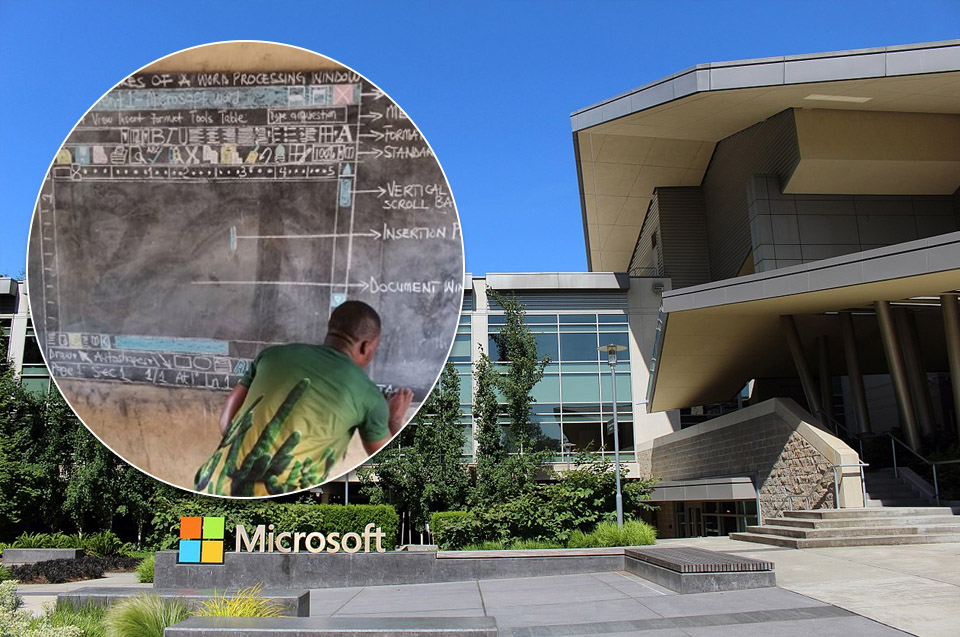 You saw the photo. A dedicated teacher in Ghana, trying to show his students how to use Microsoft Word… On a blackboard.

The hand-drawn pictures of that all-too-familiar (for those of us in wealthy nations) user interface were amazing. But still. It’s sad that a country that cares about public education as much as Ghana can’t afford computers for all their schools.

Well, there’s some good news. The photo of the Ghana teacher drawing a diagram of Microsoft Word on the chalkboard went viral, as we posted last week. And it finally landed on the desk of a person who could do something about it.

‘Teaching of ICT in Ghana’s school is very funny,’ Owura Kwadwo Hottish — also known as Richard Appiah Akoto — said in the Facebook post that accompanied the original photo. ‘I love my students so have to do what will make them understand what [I] am teaching.’

Teaching of ICT in Ghana's school is very funny. ICT on the board paa. I love ma students so have to do wat will make…

What he was teaching was word processing. And how he was teaching it was by carefully copying the user interface from a printout, then explaining what each of the buttons did. The drawings were exquisite — precise and in many colors. But the fact was, it’s hard to teach kids how to use computer software without computers. And in rural Ghana, that’s the norm, rather than an exception.

‘This is not my first time [of drawing] it. I have been doing it anytime I am in the classroom,’ Akoto told Quartz Africa.

Akoto, age 33, is the information and communication technology (ICT) teacher at Betenase M/A Junior High School in the town of Sekyedomase. In addition to all of their other subjects, if Akoto’s students want to go on to high school, they’ll have to pass a national exam. A national exam that includes using computers — even though they may never have laid hands on one in their lives.

As the school mater told Quartz Africa, “You cannot compare someone who is in front of a computer, who knows what he is doing with the mouse to someone who has not had a feel of a computer mouse before.”

One of the people who saw Akoto’s photos was a popular Ghanaian comedian, Teacher Kwadwo. (who is also a teacher). Kwadwo shared the photo with his 140,000 Facebook fans. The story quickly spread throughout Africa. Rebecca Enonchong, a tech entrepreneur in Cameroon, got wind of it and asked her followers to find out who the teacher is.

This picture has been circulating on web. Does anyone know what country? This teacher is my hero. I want to find him. #TeachingIsAVocation pic.twitter.com/k7d0ysKrDj

Twitter do your thing. Find me this teacher. https://t.co/u8N3eXguXS

Apparently, The teacher's name is Owura Kwadwo. He teaches in Gbolo Alzariya English and Arabic Primary school in the Sagnarigu district of the Northern Region, rural Ghana.

Enonchong then sent a tweet to Microsoft Africa asking for help.

Hey @MicrosoftAfrica, he’s teaching MS Word on a blackboard. Surely you can get him some proper resources. https://t.co/u8N3eXguXS

Others turned up the pressure.

@BillGates surely there must be something your Foundation can do about this? https://t.co/65Byk4ip7x

As a result, Microsoft has promised to equip Akoto with a device from one of their corporate partners, and give him access to their MCE program. In addition, Akoto will have access to Microsoft’s free professional development resources.

Akoto says that for his school’s computer lab to really get off the ground, he will need at least fifty computers. But it’s a good start!

Schools in Ghana are facing many of the same challenges that United States public schools are facing. Schools are underfunded and lack resources. Teachers are overworked and have to make do with far fewer supplies than they need. Public school is free, but often inadequate. As a result, low-income parents often feel pressure to choose between private schools or other needed resources. And often times, the private schools that market themselves to low income families all across Africa are inadequate as well.

We wish School Master Akoto and his students all the best, and hope Microsoft will step up to the challenge.