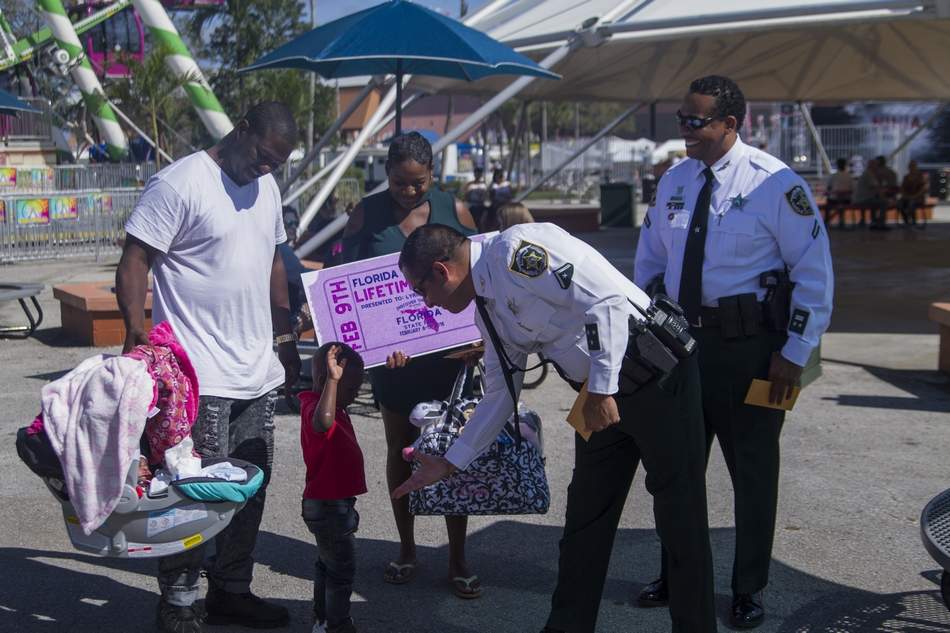 There’s nothing quite like a story of a woman giving birth in an unusual place to prick up the ears of a curious public. Especially if it happens in Florida, the unofficial capital of strange happenings.

On February 9, a heavily pregnant Kesha Martin and her husband had taken their children to the Florida State Fair. That’ when her water broke and she began active labor. Sherriff’s Deputies Roberto Ramirez and Henry Echenique responded to Ms. Martin’s calls for help just after 4 pm.

Taking “Bring Your Kids to the Fair” to the Next Level

“I was just like, oh my gosh, I’m going to have my baby at the fair,” she told a local news station. “That’s the only thing that was coming through my head. I just wanted her to be healthy.”

Together with the help of these two Sherriff’s Deputies, as well as eight others, her husband Lavarand Robinson was able to (help) Kesha safely give birth to a healthy baby girl.

“I kind of rubbed the chest of the baby, so that gave me a sigh of relief that the baby was crying and opened her eyes,” Echenique said. He held the newborn until EMS arrived.

Ms. Martin and her baby girl, named Lyric Love Robinson, were taken to nearby St. Joseph’s Women’s Hospital and were reported to be in stable condition.

All’s Well that Ends Well, but This Story Isn’t Over

Five days later, on Valentine’s Day, the family returned to the fair to receive a unique gift. Florida State Fair Executive Director Cheryl Flood presented them a lovely gift basket and lifetime passes to the fair. Not just for the family, but also for the two deputies that assisted with the delivery.

FLORIDA STATE FAIR TICKETS FOR LIFE 🎡 The family of the baby delivered by two deputies at the Florida State Fair got a special surprise this morning. https://t.co/O7Rmgi8ZQu pic.twitter.com/uqeJ5KOzj6

Kesha Martin is Not Alone, By a Long Shot

Labor and delivery are an intense time for every expectant mother and family. Where are some other unusual places where other American women have given birth recently?

In 2013, a 20-year-old Florida woman named Shardonnay Hill gave birth to a baby boy in a Lake Wales McDonald’s – three months prematurely! McDonald’s staff members hastily lay down cardboard boxes and assisted with the labor with help from 911 dispatch over the phone. The baby was born in only five minutes. Adding to the drama of an already harrowing birth scenario, it took a few moments for the baby to begin breathing.

Mother and son were taken to a nearby hospital. Family members reported that the baby boy was named Joshua Murray but had been nicknamed Ronald after his mother’s favorite eatery. McDonald’s employees that assisted with the birth looked forward to a visit from mother and son.

For anyone that has ever had a nightmare about being stuck in an elevator, Tacoma, Washington woman Katie Thacker gave birth in one! In the winter of 2012, Ms. Thacker boarded an elevator at St. Joseph Medical Center with family members and medical staff, going up to the 14th-floor birthing center. It took a while for them to make it there.

Baby boy Blake was born twenty minutes later, still in the elevator and trapped between floors. He was nicknamed “Otis,” after the elevator company, though he was not born in an Otis elevator. Dad Luke was able to climb into the elevator to cut the umbilical cord, but it was another two hours before the elevator was able to move again. Thankfully both mother and baby were able to get out with assistance from technical staff.

Lesia and Jonathan Pettijohn were expecting their third child, in three years, when the baby decided it was done waiting.

So, welcome to the world, young ones. May your lives be as unique and exciting as your birth, and may you always be surrounded by as loving a family and community as the day you were born.