Dr. BBQ and Datz team up for a new restaurant in Tampa Bay 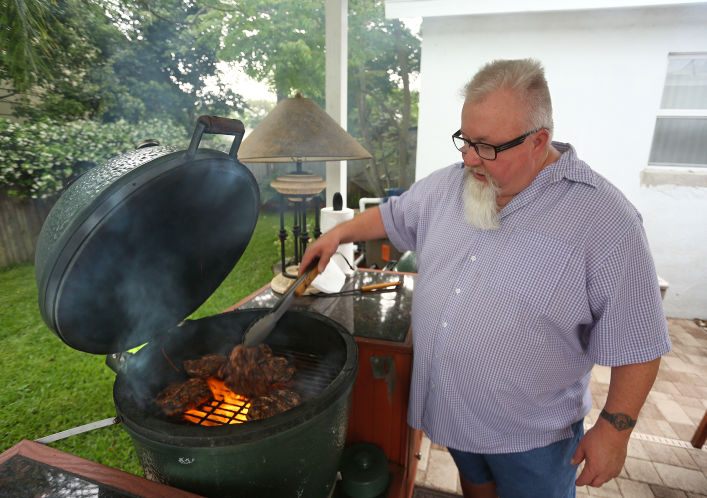 Suzanne Perry, the indefatigable co-owner of Datz, Dough and Roux in Tampa, better start working harder on a sport or hobby. Skeet shooting? Curling? Her husband, Roger, is already an inductee in the American Quarter Horse Hall of Fame. And new partner Ray Lampe has been inducted into the Barbecue Hall of Fame, celebrity chef Guy Fieri doing the honors, no less.

Over chicken tenders and mac and cheese at J. Alexander’s on Friday, the Perrys and Lampe, a.k.a. Dr. BBQ, unveiled something that diligent Instagram and Twitter followers may have suspected already: Together they will introduce the Tampa Bay area to what they are calling “artisanal barbecue.”

They are still scouting locations (Tampa, Brandon and St. Petersburg, with a couple of promising spots so far) and they are still deciding on a name (“Hall of Famers” will be in there somewhere, even if Suzanne doesn’t step up her curling regimen), but they aim to open by winter. The Perrys are also scouting sites for additional Datz locations, they said Friday.

“Barbecue is the only truly American cuisine,” Lampe said, adding that it went from “niche” to being “huge everywhere.” He travels to England next week to demonstrate in a country that has embraced the cuisine wholesale, going so far as to import ribs, brisket and such from the United States.

We have arrived, they say, at a moment when barbecue is taken as seriously as other more haute cuisines. Proof: This year the much-anticipated World’s 50 Best Restaurants list includes a Basque barbecue master, and last year brisket whisperer Aaron Franklin took home the title of Best Chef: Southwest at the James Beard Awards.

This collaboration has evolved organically. With a kid in college at Texas A&M, the Perrys have been spending a lot of time diligently exploring the barbecue of that state, orchestrating road trips that refined their ‘cue-ducation through Little Rock, Memphis, Nashville, Birmingham, Atlanta, Kansas City and Chicago.

With more than 400 barbecue awards under his belt, Dr. BBQ is a natural partner, except for one thing — he has never had his own restaurant. He taught Justin Timberlake’s crew all about barbecue at New York’s Southern Hospitality. He has consulted on projects all over the country, been on the barbecue circuit for 20 years and authored eight books. He’s a Food Network regular. But this will be his first foray as a restaurateur.

The natural question, then, is what style of barbecue will this dream team be trafficking in?

Lampe, who can often be seen in a chef’s outfit with flames up the pant legs and sleeves but on this day was sporting blue seersucker, did not mince words.

“I’m a barbecue historian and all my knowledge tells me it’s not that simple, all these regions of barbecue. Texas this or North Carolina that. Texas is a big state. What do you mean by that? I’m burdened by not being able to accept the bull- – – -. It’s going to be Dr. BBQ style.”

Roger ticks off the basics: 4,000 to 5,000 square feet, more than 150 seats, with an indoor-outdoor feel and an open kitchen. Suzanne adds that, as with their other restaurants, the barbecue restaurant will have lots of Instagram-worthy visuals (a spot on Good Morning America this week scooted Datz’s Instagram account past 11,000).

The Perrys have brought Lampe on for menu development and “aggressive quality control,” and while he says he won’t be in the back trimming the briskets, he’s quick to tick off some of the dishes he envisions. Sure, sides like corn and mac and cheese, but maybe beans in different styles (going east, beans get sweeter and sweeter), housemade pickles, hominy and, as a nod to the Tampa area, smoked fish spread.

For the Perrys, this represents the first time they’ve sought a partnership. And yes, interloper celebs Michael Mina (Locale Market) and Marc Murphy (Grey Salt) have set up shop, but the Perrys see this as the first local celebrity chef-owned restaurant in our area.

For Lampe, who is instantly recognizable for his flat-top of white hair and long-but-manicured beard, this new project is proof positive that barbecue has been legitimized as “serious food.” For him personally, though?

“I’ve always thought it would be cool to have a place here. A place to hang out.”