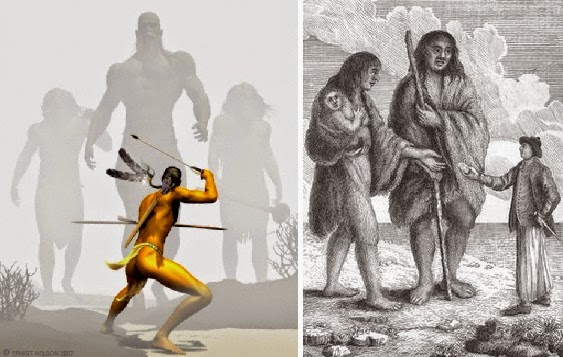 The Cherokee called them the Moon People. The Utes and Paiutes spoke of a hideous race of cannibals ten feet tall living in caves. And the Choctaw also have an account of the race of giants that first colonized the Ohio Valley.  From Old World Roots of the Cherokee, chapter 5, “America’s Middle Ages,” pp. 78-79, we read:

What kind of Indians lived in the territory the Choctaw and Chickasaw carved out for their new home? According to their traditions, reports Cushman, as confirmed by excavations of bones in Tennessee, it was a “race of white giants”:

[T]he tradition of the Choctaws… told of a race of giants that once inhabited the now State of Tennessee, and with whom their ancestors fought when they arrived in Mississippi in their migration from the west, doubtless Old Mexico.

Their tradition states the Nahullo (race of giants [literally, wizards]) was of wonderful stature; but, as their tradition of the mastodon [which used to be found on the Great Plains], so this was also considered to be but a foolish fable, the creature of a wild imagination, when lo! Their exhumed bones again prove the truth of the Choctaws’ tradition (151).

These giants could have been Rafinesque’s Atlans.

Cushman then recounts the discovery in 1880 at a burial mound site near Plano, Texas, of human bones “of enormous size… the femoral bones being five inches longer than the ordinary length, and the jaw bones… so large as to slip over the face of a man with ease.”

Cushman goes on to identify them with the older occupants of North America called Allegewi or Taligewi (Talegans). Many historians, moreover, speculate they were the builders of the Adena mounds.

As for the Chickasaw, Cushman notes that they have no record of their history before the colonial period, although it is assuredly “the same as the Choctaws, being one tribe and people until the division made by their two chiefs Chikasah and Chahtah many years after their arrival and location east of the Mississippi River” (p 358).

Of the Natchez, Cushman records that they, “if tradition may be believed, also came from Mexico where they had lived for centuries” (p 440).

Innumerable moons ago, a race of white men, ten feet high, and far more rich and powerful than any white people now living, here inhabited a large range of country, extending from the rising to the setting sun.

Their fortifications crowned the summits of the mountains, protecting their populous cities situated in the intervening valleys.They excelled every other nation which was flourished, either before or since, in all manner of cunning handicraft — were brave and warlike — ruling over the land they had wrested from its ancient possessors with a high and haughty hand. Compared with them the palefaces of the present day were pygmies, in both art and arms.

They drove the Indians from their homes, putting them to the sword, and occupying the valleys in which their fathers had dwelt before them since the world began.

At length, in the height of their power and glory, when they remembered justice and mercy no more and became proud and lifted up, the Great Spirit descended from above, sweeping them with fire and deluge from the face of the earth.

The mounds we [i.e. the speaker Chief Rolling Thunder and his Spanish listener] had seen on the tablelands were the remnants of their fortresses, and the crumbling ruins that surrounded us all that remained of a mighty city.[i]

The word Nahoolo or Nahullo “is now emphatically applied to the white race and no other… The Nahullo were of white complexion, according to Choctaw tradition, and were still an existing people at the time of the advent of the Choctaws to Mississippi,” concludes Cushman (p 153).

In agreement, the Indian trader Adair often refers to the Nani Ishtahoolo as departed white ghosts vested with spiritual powers whose descendants were priests and magicians.

Their cries and magic spells could still be heard in the mounds like those at Ocmulgee.[ii] These references contribute to the suspicion that the “Indians” who preceded Asiatic tribes from Mexico were, as we would say today, Caucasian.

About exactly a year ago on this blog, we published a post about “Neanderthals in America,” mentioning also the peculiar archaic skeleton that is now a roadside attraction in Arizona, called The Thing. In the meantime, we acquired a copy of Fritz Zimmerman’s book, The Nephilim Chronicles, which reproduces over 300 historical accounts of Giant skeletons.

Many are associated with the earliest mound sites in America, but Zimmerman’s survey of this worldwide phenomenon ranges from the Hunter-Fisher People of northeast Europe and Red Paint People whose movements were circumpolar to the giants of the Bible, noted by the Babylonian Talmud as having double rows of teeth, and “Giants’ Remains in the British Isles” (pp. 157-65).

Navajo legends speak of the Starnake People, a regal race of white giants endowed with mining technology who dominated the West, enslaved lesser tribes and had strongholds all through the Americas. They were either extinguished or “went back to the heavens.”

The name may be a corruption of the Biblical race known as Anakim (Num. 13:33, Deut. 1:28). The name Og (Hebrew “chief”) appears to be characteristic (see Zimmerman, pp. 188-91). The ogham alphabet is attributed to this cultural founder.

Certainly, many of the mound sites uncovered in the nineteenth century tell a story of constant warfare by incoming Asiatic tribes  against the giants occupying the land. One grisly scene showed thousands of skeletons, male, female and young heaped in a mass grave, with warriors’ skulls pierced by arrows.

It would appear that as these aboriginal inhabitants of the Ohio Valley were gradually displaced, some members of their society went over into the ranks of the new conquerors, bequeathing a strain of great stature still noticeable, for instance, in the Mobilian chief Tuscaloosa and DeSoto’s Indian queen Cofitachiqui, both of whom were said to be seven feet tall.

We are struck by the following traits of this giant race or ethnic group from human prehistory:

-Polished slate tools including fishing plummets, which were apparently regarded as sacred

-Belief that the Grandmother Moon was the repository of souls

-Diet emphasizing shellfish (for which the double row of teeth probably was selected as an evolutionary advantage in their beachcomber origin out of Africa?)

-Inscriptions on artifacts, especially pipes, often buried with the dead

-Use of coal and petroleum

-Knowledge of seafaring, mathematics and engineering, including canals and irrigation

-A language apparently Afro-Asiatic and close to Semitic tongues

-Kingcraft:  nobles were buried in seated positions on thrones surrounded by a coterie of their retainers

When Denisovan Man was first discovered, we had just a fingerbone to go on. We can only extrapolate the look of the skull. Geneticists conjecture, however, that it was an Austronesian type.

We suggest that a modern prize of science will belong to the geneticist who can derive ancient DNA to study and classify from the bones of giant hominids that are unavoidably plentiful in the archeological and mythological records of humankind.

Maybe the owner of The Thing will allow researchers to borrow one of the femurs for laboratory analysis and measurement.

If that’s not possible, the Smithsonian, Carnegie Institute and dozens of local historical societies throughout the Midwest have basements and storage facilities brimming with these relics of American history.