Was There a Great UFO Battle Over Sweden in 1665? 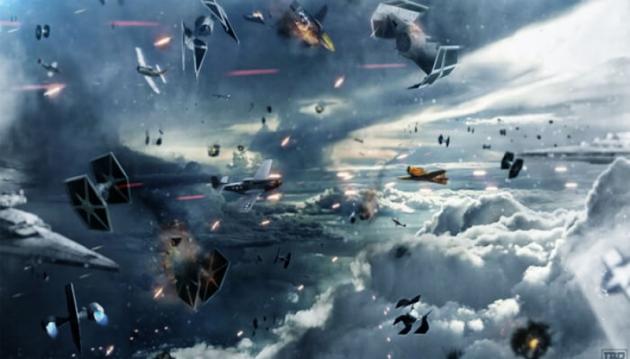 This historic account from 1689 tells about a massive UFO sighting that took place over Sweden. People witnessed a great battle in the sky and afterwards they fell sick in mysterious circumstances.
Sightings of paranormal phenomena are not so unusual as the term might suggest. Our vast imagination casts its reflection onto anything new we came across, to ease our perception over its nature and definition, so we can explain it to ourselves and the others.
But some things are unexpectedly more staggering and plainly inexplicable. Such is the case of one of the most intriguing UFO sightings ever recorded.
In the noon of April 8, 1665, in Barhofft, Sweeden (now in Germany), several fishermen witnessed one of the most vivid and active displays of UFO phenomena: ships in the sky battling one another, followed in the end by the appearance of a dark hovering object.
This event was marked in the historic annals by Erasmus Francisci in 1689 in “Der wunder-reiche Ueberzug unserer Neider-Welt/Oder Erd-umgebende” (translated as “the beautifully – rich covering of our world / or earth-surrounding”), after gathering sufficient relevant reports related to the so-called UFO battle.

The fishermen’s illness was linked to the UFO battle since no other causes were determined, with any means of diagnosis lacking in this particular case. Although the event happened centuries ago, Chris Aubeck and Martin Shough decided to carry on the discontinued investigations and unravel the mistery once and for all, from a scientific perspective.
Martin Shough is a research associate for the NARCAP (National Aviation Reporting Center on Anomalous Phenomena) and Chris Aubeck is the founder of the Magonia Exchange historical research group. Chris Aubeck can be considered a very reliable source and an authority in the field of UFOs as cultural history, also being known as a prolific writer on this subject.
Their research project regarding the alleged 1665 UFO battle started with the first reasonable explanations for the phenomenon, conducting the investigation with a more rational and scientifical approach. For instance, after meticulous calculations of the sun’s angle, they ruled out the possibility of an ice halo that would substantially contribute to the massive optical illusion.

Taking into account the episode took place in a maritime environment, the researchers consider the sighting to be most likely the result of a natural phenomenon that occurs from a distance, above the horizon at an exact conjunction of thermal layers in the air. In the right conditions, the horizon can display a surrealistic dynamic image, a Fata Morgana effect, only this time it happened at a higher distance in the sky, for a longer period of time. Besides, the Fata Morgana couldn’t have cast a hat-shaped object. Science- 0, UFO- 3.
These are the critical factors that rise even in the most skeptical minds, the slight possibility of this event being an actual UFO manifestation leaving more than enough room for those who truly believe, making a firm denial of extraterrestrial activity impossible.
Other unshakable minds refuse to accept this sighting as proof of UFOs’ millennial existence on Earth, and blame this unusual phenomenon on a mere flock of birds that merged into a pattern ressembling a warship. It still doesn’t explain the sighting of the dark round object.
Still, mirage or not, this extremely tricky and extremely vivid visual experience took the unaware fishermen by surprise, thus increasing the shocking experience from an emotional state up to the point of physical sickness.
https://ufoholic.com/