How ISIS Is Using One Tiny Pill to Give Fighters ‘Superhuman’ Powers in Battle? 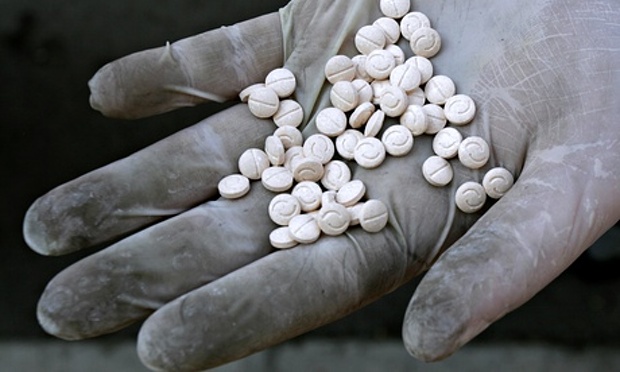 Most people think that it’s radical Islam that’s fueling the bloodlust ISIS seems to live for. It may be true and a political agenda makes the ideology even more dangerous, but there’s more to why ISIS fighters are almost inhuman in their capacity to kill even women and children who do not support their goals. Newly discovered, there’s a drug called Captagon that has a dramatic effect on how the men behave on the battle field. It is also a major cash cow for the terrorists.

A tiny, highly addictive pill, captagon is actually produced in Syria and then widely distributed across the Middle East. The sale of this drug brings in hundreds of millions of dollars back into ISIS’s black-market economy each year, helping the terrifying terror group buy new arms to keep the conflict going strong.

Captagon is also the reason behind ISIS fighters’ fearlessness and ruthlessness. A powerful amphetamine tablet, its recipe is based on the original synthetic drug known as “fenethylline.” This drug produces a euphoric state in users and keeps the fighters awake and up for days killing without remorse.

“You can’t sleep or even close your eyes, forget about it,” said a Lebanese user, one of three who appeared in a BBC Arabic documentary that aired in September. “And whatever you take to stop it, nothing can stop it.”

“I felt like I own the world high,” another user said. “Like I have power nobody has. A really nice feeling.”

“There was no fear anymore after I took Captagon,” a third man added.

Recently, the Turkish authorities seized a record haul of almost 11 million pills of the synthetic stimulant drug Captagon close to the Syrian border. Because this drug  is believed to play a crucial part in Syria’s civil war, this interception could be a game changer, or so the West and its allies hope.

For now, however, the pills are in ISIS’s hands and they are still fueling the fighting. Not only are ISIS fighters taking and selling Captagon, but regular Syrians are also becoming addicted to the drug, which is sold between $5 and $20 a pill. Doctors report that the drug has dangerous side effects, including psychosis and brain damage, according to the BBC.

According to Rueters, people held in questioning by Syrian authorities reportedly feel no pain while high on Captagon: “We would beat them, and they wouldn’t feel the pain. Many of them would laugh while we were dealing them heavy blows,” a drug control officer said.

One ex-Syrian fighter who spoke to the BBC said the drug is tailor-made for the battlefield because of its ability to give soldiers superhuman energy and courage:

“So the brigade leader came and told us, ‘this pill gives you energy, try it,’ ” he said. “So we took it the first time. We felt physically fit. And if there were 10 people in front of you, you could catch them and kill them. You’re awake all the time. You don’t have any problems, you don’t even think about sleeping, you don’t think to leave the checkpoint. It gives you great courage and power. If the leader told you to go break into a military barracks, I will break in with a brave heart and without any feeling of fear at all — you’re not even tired.”

The new focus on Captagon, and how to stop its distribution, could be a way to gain more leverage over ISIS. Hopefully, Turkey’s interception of the huge supply of the drug will have a negative effect on the morale of ISIS fighters.