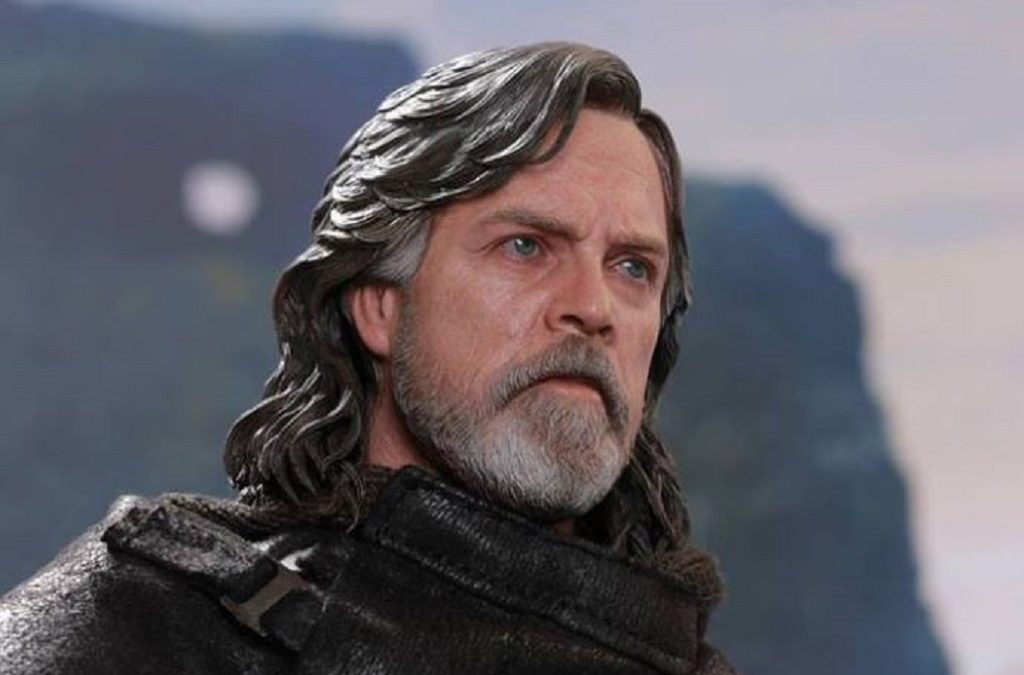 Admit it. Ever since you saw Star Wars: The Last Jedi, you’ve been wondering if Mark Hamill’s iconic character Luke Skywalker’s gone for good.

Then, on Wednesday afternoon, Mark Hamill cast a broad hint via social media. In a Facebook post, he posted four photos of Luke Skywalker action figures from various points in his career. And then he dropped his bombshell.

But first, here’s some background in case you don’t know he’s as awesome on social media as he is with a lightsaber. And sometimes just as cutting.

The Social Media’s Strong with This One

For starters, Mark Hamill has been absolutely crushing it with tweets trolling President Donald Trump. It all started shortly after the election when Trump sent out a bizarre and menacing tweet.

Happy New Year to all, including to my many enemies and those who have fought me and lost so badly they just don't know what to do. Love!

It seemed so creepily like something the Joker would say, comedy writer Matt Oswalt tweeted:

this sounds like something the Joker would say right before releasing a swarm of killer bees into Gotham https://t.co/SyKsCHvyuh

After that, Mark Hamill couldn’t resist bringing back the character he voiced in the1990s animated Batman series.

He jokes and cavorts with his followers daily. And now his ongoing Twitter feud with the president attracts news and politics junkies as well as Star Wars fans. And speaking of spoilers, Donald Trump was certainly spoiling for a fight over the 2018 Academy Awards.

Mark Hamill at the Oscars

Among the best things about Mark Hamill’s humor is that he’s not afraid to poke fun at himself. It seems that no one is able to spell his name correctly. So how did he respond when the Academy of Motion Pictures honored him with a star on the Hollywood Walk of Fame? He jokingly took some random guesses for how they’d spell his name.

Surprisingly, they managed to spell “Mark Hamill” right, for once. Still, the Tweeter-in-Chief just had to throw shade his way.

Lowest rated Oscars in HISTORY. Problem is, we don’t have Stars anymore – except your President (just kidding, of course)!

Then, the Star Wars icon clapped back, to the delight of his 2.64 million followers on Twitter. 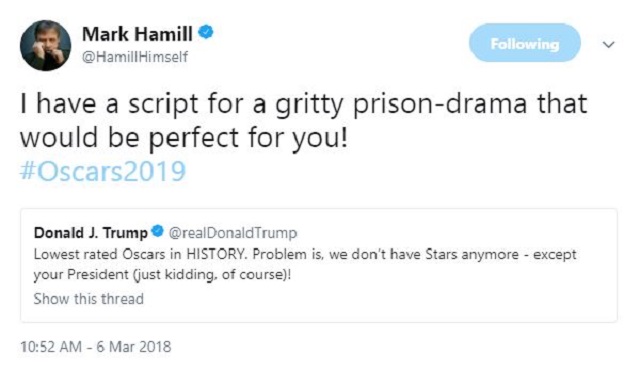 No wonder so many of Mark Hamill’s fans are so desperately hoping they haven’t seen the last of him in the Star Wars films.

After the unveiling of the star in Hollywood, Hamill dropped a spoiler for the upcoming Star Wars movies.

Mark Hamill was online with a critique of the new line of  action figures that were released for the latest and previous Star Wars movies. He posted pictures of these action figures with some hilarious descriptions on both Facebook and Twitter:

Whoa, wait a minute… Did he just say “future Force ghost?” That sure got people’s attention. In less than an hour, a fan exclaimed,

“Did you just confirm that you’re coming back as a force ghost for EPIX?!?! That’s what I read and I’m gonna stick to that and run away yammering about it.”

We hope we do see the Ghost of Luke Skywalker, because Star Wars just wouldn’t be the same without him.

This action figure is indeed rather lemony. Or perhaps more banana-colored? We barely remember this starry-eyed young Luke as he appeared in the first movie (which was actually the fourth part, but that’s a long story). Is there a possibility that the lightsaber was designed by a balloon-tying clown that ran out of air?

There are no words. None. It’s supposedly from The Empire Strikes Back, as he recovered from a Wampa attack. But, WHY?

Even in his prime, Mark Hamill probably never looked even remotely like this. Maybe they just reused the mold from the old Lou Ferrigno Hulk action figure. Picture this in green. You see what we see, right?

We did a double-take on this one. Aside from the plastic hair, this doll looks so life-like it is scary.

While no one is 100 percent sure if Hamill was dissing the action figures, or trying to market them, we are certain that his titles are appropriately descriptive.

Nor is this the first time Mark Hamill has made fun of Star Wars action figures.

KID's Top 4 LEAST-FAVORITE STAR WARS TOYS
A) Luke Skywalker Off-Camera in Ugly Blue Sweater Featured In No Movie — EVER
B) Cuddly Sarlaac Devours Victim Pillow
C) 3PO Show Me Where He Touched You Tape-Dispenser
D) R2-D2 Does Nothing But Hold An Egg-Cup pic.twitter.com/JS6hYMd0M6