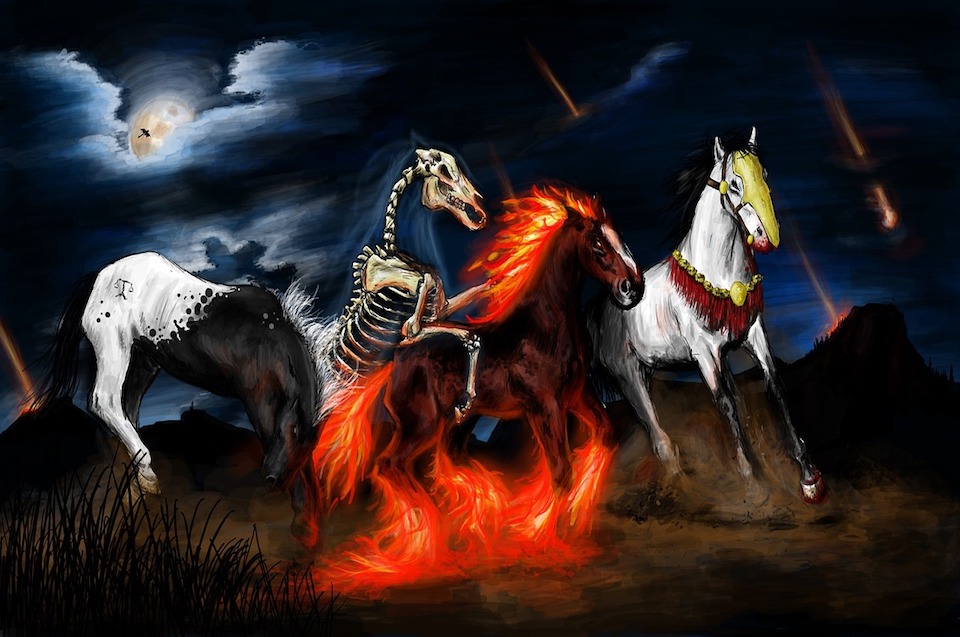 It’s time to run up your credit cards*, quit your job* and kiss all your loved ones goodbye. The world is about to end, again. According to some (okay, one), the end of the world will come on June 24. Yes, we’ve heard this before — several times, but this time, says one biblical conspiracy theorist, it’s for realz. So much for those summer plans.

Someone named Mathieu Jean-Marc Joseph Rodrigue says that the June 24th date comes from the Book of Revelations.

“He was given authority to act for 42 months.” Rodrigue did the calculations based off of this and concluded that the Earth goes bye-bye in 2018. As reported by The Daily Star, “to find the date of the apocalypse, he takes the 666 figure and adds it to his earlier calculations, with the 42 months from the bible. When all added together, he claims this indicates the world will end on June 24, 2018.”

Rodrigue also cites another line in Revelations, which talks about the Devil and the number 666.

(H)e claims to have heard a”voice in the middle of the four living beings, “which represents a man with a figure of 666. For those that don’t know, 666 is the number associated with the devil. With the help of some math, he adds the 66 figure to the 42 months in Revalations. According to his calculations, the end of the world would be on June 24, 2018, though how it will happen is yet to be discovered by the curious conspirator.

Rodrigue isn’t alone. The 16th Century French prophet Michel de Nostradame (a.k.a. Nostradamus) allegedly predicted that in 2018, the dead will rise from their graves, there will be natural disasters and World War III could break out. Apparently, Nostradamus also predicted Donald Trump.

What We’re Supposed to Do About It

Apparently, there isn’t a lot we can do about it. After all, according to Rodrigue and maybe Nostradamus, it’s all pre-destined. Most religious people would advise that you make things good with your God, whatever that entails for you. Other people suggest stocking up on food, water and other necessities because it doesn’t sound like the end of the world will be neat and tidy.

What Does the Bible Actually Say?

So, it takes a special kind of, shall we say, confidence, to predict the end of the world, especially since the predictions seem to come on a yearly basis.

10 Times the World Was Supposed to End

A lot of you probably rolled your eyes at the idea of yet another apocalyptic prediction. Who could blame you? We seem to get these predictions often, and unless most of us are living in an alternate universe, the world is still here and so are more than 7 billion people.

Here are ten times the world was supposed to end:

Just last year, Christian author David Meade predicted that the world would end on September 23rd. He based his claims on astronomy, geopolitics and the Bible.

I’m having flashbacks to one of the other times the world was supposed to end pic.twitter.com/9mRYcdtMUv

On July 29th of 2016, the world was supposed to end when the earth did a “polar flip,” when iron shifted in the earth’s core. This is something that happens on occasion, but has never led to the end of the world. The group making the prediction, End Time Prophecies, also prophesied that Barack Obama would reveal himself to be the anti-Christ.

On September 27 of 2015, Julie Rowe, a Mormon author predicted that the “blood moon” would signal the total disaster. Her church disavowed her prediction, but she stood firm, at least until the world didn’t end.

Pic of the moon toward the end of the lunar eclipse on the evening of 27 Sept 2015. #thatsnotnomoon pic.twitter.com/gePHCp3ijQ

The problem with Rowe’s prediction, according to Chris McCann of the eBible Fellowship, is that it was a few days off. According to McCann, the blood moon would bring about the world’s “annihilation,” which was supposed to happen not on September 27th, but on October 7th.

BIRTH PANGS FOR 10/7/2015: ALL END TIME NEWS COMPILED INTO ONE REPORT https://t.co/tOMt4sCWEW pic.twitter.com/mqOMEeS0Sk

McCann and Rowe weren’t the first people to see the blood moon as apocalyptic. On April 15, 2014, Texas televangelist John Hagee predicted that the blood moon would bring about the End Times.

JESUS' MESSAGE FROM THE BOOK OF TRUTH.The beginning and the end of the world will become as oneMonday, April 21st, 2014 @ 15:56 My dearly beloved daughter, it is very difficult for souls, even those with great faith, to reconcile the world they live in with that of My Kingdom. The world, as it stands, is incompatible with My Kingdom and this means that those of you who know Me and who truly love Me find it painful, at times, to live your daily lives. To love Me means following My Teachings and calling on Me to forgive you your sins. This is the only way you can become part of Who I Am. You cannot become part of My Kingdom until you acknowledge the Truth and accept that, while sin exists, the world can never be perfect. As long as man does everything according to his own free will, when he is being constantly tempted to indulge in his own selfish needs, he will remain a slave. When you live life according to the Word of God, you will be able to see the world for what it is. You will witness the wonder that is the Miracle of the Earth, which was created by My Father. But, you will also see how the weakness of man has separated him from God. As long as this is the case, the world, as you know it, cannot be raised again, to its former Glory. This is why you will only find true peace when I come again to bring you into the Paradise My Father, created for you in the beginning. The beginning and the end of the world will become as one. There will be no Heaven, no Purgatory and no Earth – there will only exist two entities. My Kingdom – where life will never end, for those who allow Me to gather them into My Heart and Hell for those who won’t turn to Me. All things will be according to My Mercy and the Holy Will of My Father, Who loves all of His children. He wants to save everyone and through Me. I cannot force those who do not want to be part of My Kingdom, or who reject all of My efforts to bring them a wonderful glorious eternity, to follow Me. Do not ignore My Pleas to help these poor souls.

There are a couple of apocalyptic predictions that nearly everyone remembers. One was for December 21, 2012, when one of three Mayan calendars ended. Even the remaining Mayans payed no attention to that date, other than to predict that it signified the end of a cycle and that perhaps humans were ready to return to nature. That didn’t happen either.

The year before that, some predicted that the world would come to an end in August or September of 2011. This prediction didn’t evoke God an instead was based in science. According to some conspiracy theorists, a comet named Elenin was supposed to hit the earth and cause all sorts of calamity. Elenin did pass by, but only in crumbs. Space crumbs (or space dust, as scientists might say).

Elenin wasn’t the only doomsday prediction in 2011. A California televangelist, Harold Camping of the Family Radio Network, predicted that the rapture would occur on May 21st. He even predicted the time: 6:00 P.M. When that didn’t happen, he called for a reboot on October 21st.

Perhaps the biggest dud of a prediction was for January 1st, 2000. Unlike the others, the end of the world, according to those predicting it, wouldn’t come from God or any other heavenly body. This would all be man’s fault. People were convinced that the fact that computers weren’t ready for the year “00” to mean 2000 instead of 1900. The result, it was theorized, would mean the collapse of all infrastructures. Meaning that no one would have food, water or heat and that the financial world would collapse. How supposedly intelligent people got that so wrong, we may never know.

On March 10, 1982, scientists predicted our heavenly demise. Eight years earlier, astrophysicists John Gribbin and Stephen Plagemann published “The Jupiter Effect” which predicted that all the planets would align on the same side of the sun, which would be a literal disaster for the earth’s gravitational pull.

*We seriously don’t recommend running up all your credit cards or quitting your job, unless quitting your job was something you already planned to do. Go ahead and kiss your loved ones, though. That’s always a good idea.

Inform Overload reports on the world ending on June 24.

Featured image: CC by 0, by Zering via Pixabay