This Viral Pup’s Heartbreak Brought Readers Out of the Woodwork 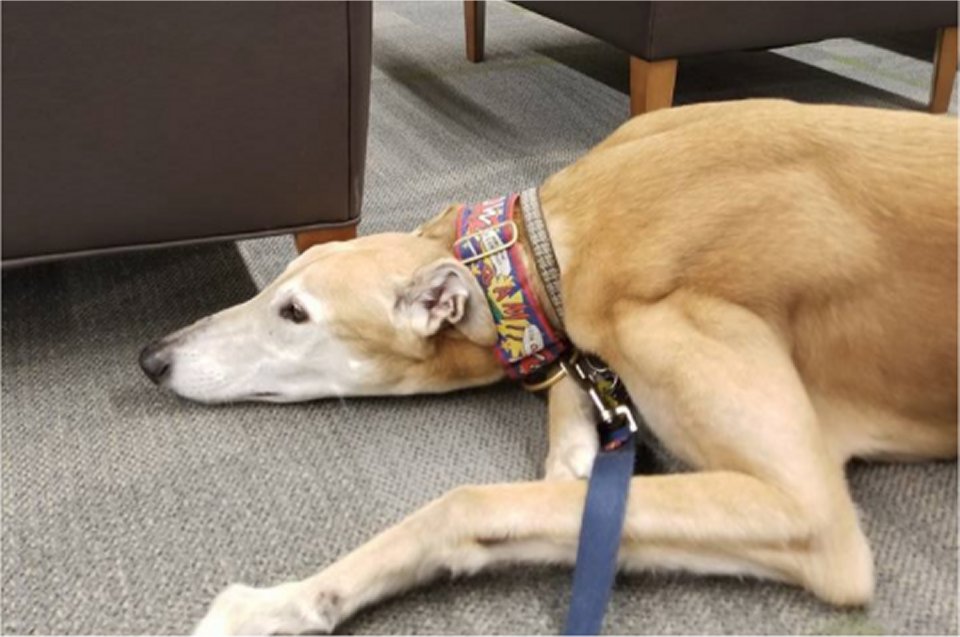 This poor, sad pup looking for someone to read to him went viral. Sting the greyhound put on a heartbreaking performance at the White Bear Lake Library in Minnesota. He looked so forlorn, his human, John Muellner, posted pictures of Sting on Facebook, shooting the lonely looking fella to Internet fame.

Sting was waiting for kids to show up for the “Paws to Read” program so they could read to him. The program, hosted by the library, is for children 4 to 8 years of age. Children can read to a therapy dog at the library as a way to improve their reading skills.

But when Sting showed up last Wednesday for his shift, no one had signed up to read to him. Muellner decided to post some pictures of Sting on Facebook, saying:

“Unfortunately nobody signed up to read to Sting at the White Bear Lake library tonight. If you know of a 4 to 8yr old who would like to read to a dog…Sting will be there Feb 21st 6:30 – 7:30.”

Unfortunately nobody signed up to read to Sting at the White Bear Lake library tonight. If you know of a 4 to 8yr old…

Even though there were no signups for that night, Mueller and Sting decided to go to the library just in case. At the very least they could visit with the librarians or find someone to read to him there onsite. No such luck. Sting sat and waited patiently to no avail.

After making the post public the next day, Sting went viral. The library told Mueller that they had been inundated with phone calls. And as of Saturday morning, Mueller’s sad pup post had been shared more than 85,000 times. It really took off after a Greyhound rescue shared the post with its followers.

Sting’s reading card is now full through April, according to White Bear Lake Children’s Librarian, Ann Wahlstrom: ”We even added a couple nights.”

Sting had looked so desolate, that people called the library just to check on him, according to Wahlstrom. “We’ve had multiple calls of people who just want us to hold the phone up to Sting’s ear so they can read to him.”

Mueller told White Bear Press that Sting’s mournful appearance is deceiving and that no one should worry about him.

“He isn’t sad or lonely but that’s just the look he normally has.”

Some folks as far away as New Zealand, Europe, and South America have even asked to video-chat with Sting. The therapy pup hasn’t let it go to his head, though. “He’s pretty blasé about it,” Muellner said. “Very unflappable.”

Mueller said that Sting has been with the reading program for two years, but also visits two local hospitals as a therapy dog for patients, staff, and even visitors. Sting, 10, was a former racing dog who was placed with his human through Greyhound Pets of America seven years ago.

Wahlstrom explained the “Paws to Read” program: “We want it to be a fun, safe environment where kids get to sign up and read to a dog in a really non-threatening, nonjudgmental place for kids to really work on their literacy skills.”

Even though Sting is booked up, for now, the Ramsey County library has other therapy dogs for their reading program, and Sting has done a lot to promote them. The other pup for the White Bear Lake location is Lacey, who has also had a lot of signups lately.

“We’re just so touched that people are taking time out of their schedule and loving Sting and giving us a call and checking in. We’re just overwhelmed with love.”

Ramsey County libraries has six therapy dogs on the roster, working in four of its libraries. The dogs complete special training to work with children, and their human guardians must undergo a complete background check.

Paws to Read says that studies have shown that children who regularly read to cats and dogs improve their reading skills. Animals don’t judge (or finish sentences), and the non-judgmental companionship allows them to practice at their own pace. The animals seem to like it, too.

The program advocates shelter cats and therapy dogs as the perfect reading practice partners and connects reading programs, on local and national levels, with learning readers and animal friends.